Management of species concurrent with global change requires understanding of how shifting environmental constraints, dispersal limitation, and biotic interactions yield alterations in species distributions. Local range boundaries provide tractable settings for experimental range perturbation to assess how ecological and evolutionary factors yield distributions. Patchy annual grassland plant populations are easily identified in rangeland landscapes and can shift or appear in relatively constant locations from year to year. These range boundaries present excellent opportunities to examine local constraints on populations over short spatial and temporal scales. Maureen Stanton and I, in the Department of Evolution and Ecology at UC Davis, are examining the local scale ecological and evolutionary constraints on the distribution of the annual plant Gilia tricolor, or Bird’s eye, at the McLaughlin Natural Reserve in the California Coast Range. We aim to understand how environmental and genetic factors affect local expansion of plant species’ ranges, including how range expansion in plants may be influenced by adaptation and by dispersal of dormant seeds beyond those boundaries. Understanding the mechanisms that control species’ range boundaries, be they local or regional, is important to understanding the spread of invasive species, the limitations of native species, and the potential changes in range distributions that is likely under climate change forecasts. We are also working with collaborator Richard Gomulkiewicz at Washington State University to develop theoretical models based on our field data to explore the role that seed dormancy plays in setting this local population boundary.

In Moore and Stanton 2014 we show that conservation of a local range boundary of the annual plant Gilia tricolor is fostered by both spatial and temporal variation in selection. Our next manuscript, now in prep, explores whether or not seeds are able to predict the quality of microsites for reproduction. I’ll be talking on this paper at the Ecological Society of America Meetings in August 2014 here in Sacramento.

Are grassland annual forbs limited by dispersal? Available habitat? Or both? 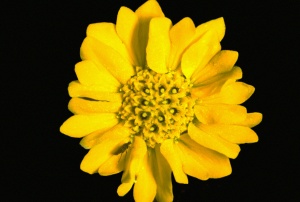 In past studies I have have explored the factors that contribute to the fluctuating boundaries of patches of one of California grassland’s most charismatic native wildflowers, Lupinus nanus, sky lupine another California grassland native annual.  I found that variation in soil moisture, seed availability, seed dormancy, and variable competition with exotic species all contribute to the shifting patterns of sky lupine patches over time (Moore 2009). We also found that suitable unoccupied sites for two native annual species were most likely to be found in areas near to existing populations, rather than far from patches (Moore et al 2011). This suggests that at least some native forb species are locally dispersal limited and that environmentally suitable habitat is spatially clustered. These studies, and other work that I conducted with Sarah Elmendorf  generated my interest in seed limitation and my curiosity about how the ability to identify seed limited sites maybe used in a restoration context.

I am now continuing to explore how species interactions limit native forb distributions through a (nearly) 10-year old experiment on three tarweed species (Harrison et al. 2010).  For our next manuscript following the 2015 field season, I will model demographic performance of each species in all three niches, the compare the predicted lambdas with long-term abundance in 80 grassland research sites to determine if there is evidence for source sink dynamics across the range of habitat suitability.